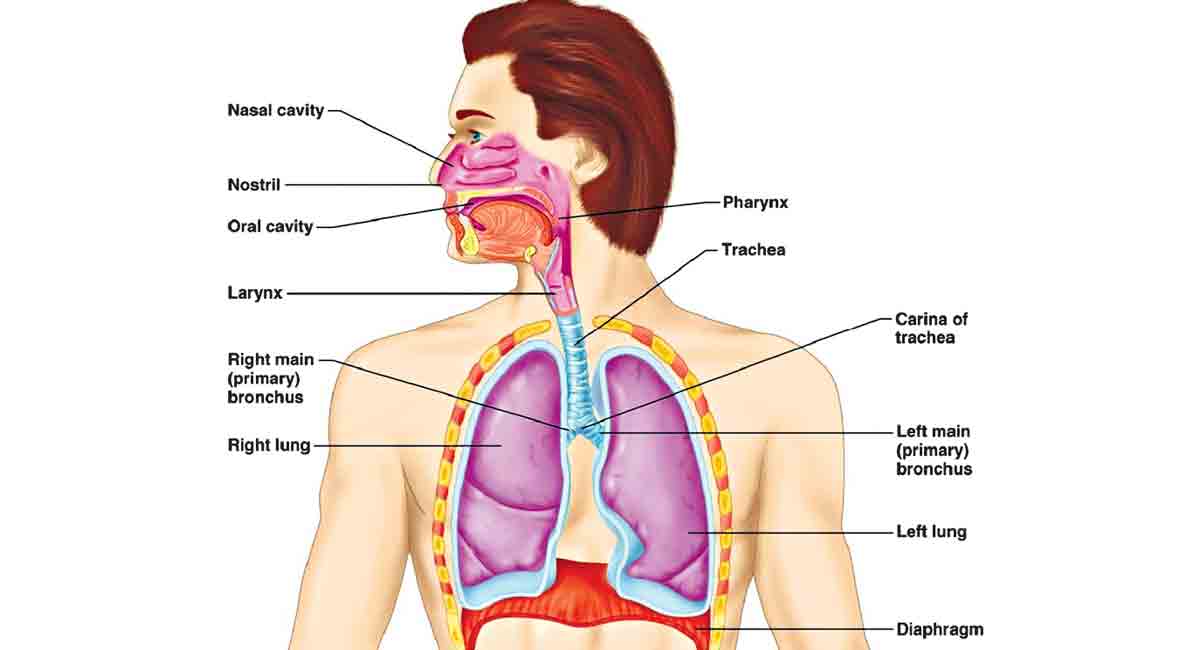 Functions of the human respiratory system

Hyderabad: This article is a continuation of our decoding of our main bodily organs. We had discussed digestion and absorption of food and related diseases. In this article, we will discuss the function of lungs and respiratory organs in the human body.

• We have a pair of external nostrils opening above the upper lips. It leads to a nasal chamber through the nasal passage.

• The nasal chamber opens into the pharynx, part of which is the common passage for food and air.

• The pharynx opens through the region of the larynx into the trachea.

• The larynx is a cartilaginous box that helps produce sound and is therefore called the sound box.

• During swallowing, the glottis may be covered with a thin elastic cartilage flap called the epiglottis to prevent food from entering the larynx.

• The trachea is a straight tube extending to the middle chest cavity, which divides at the level of the 5th thoracic vertebra into a right and left primary bronchus.

• The branching network of bronchi, bronchioles and alveoli includes the lungs.

• We have two lungs covered in a double-layered pleura, with pleural fluid between them. It reduces friction on the lung surface.

• The part starting with the external nostrils up to the terminal bronchioles constitutes the conducting part while the alveoli and their ducts form the respiratory or exchange part of the respiratory system.

• The conductive part carries atmospheric air towards the alveoli, rids it of foreign particles, humidifies it and also brings the air back to body temperature.

• The exchanger part is the place of actual diffusion of O2 and CO2 between the blood and the atmospheric air.

• The lungs are located in the thoracic chamber which is anatomically an airtight chamber.

• The thoracic cavity is formed dorsally by the spine, ventrally by the sternum, laterally by the ribs, and on the underside by the domed diaphragm.

• The anatomical configuration of the lungs in the thorax is such that any change in the volume of the chest cavity will affect the lung (lung) cavity. Such an arrangement is essential for respiration, because the lung volume cannot be directly modified.

• Breathing involves the following steps:
 Respiration or pulmonary ventilation by which atmospheric air is drawn in and CO2-rich alveolar air is expelled.
 Diffusion of gases (O2 and CO2) through the alveolar membrane.
 Gas transport by the blood.
 Diffusion of O2 and CO2 between blood and tissues.
 Use of O2 by cells for catabolic reactions and the resulting release of CO2.