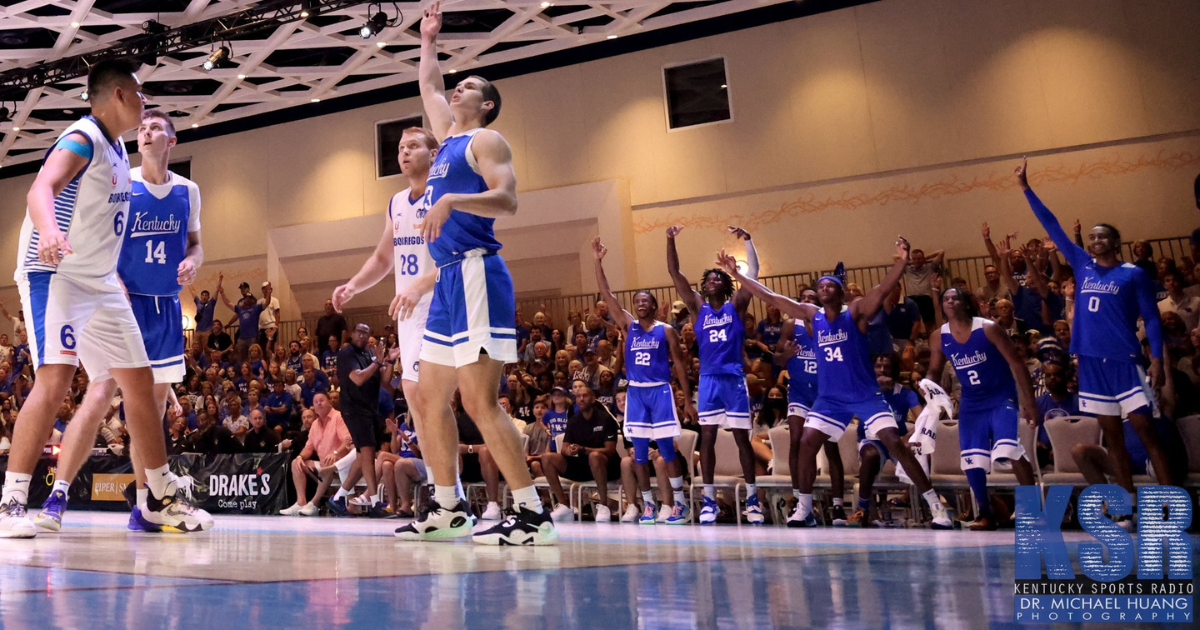 On the court, Kentucky men’s basketball looked like a team with high hopes for the upcoming season. Two exhibition games in the Bahamas saw the Wildcats win by a total of 114 points with the rotating 10 plays generating scoring plays at both ends of the floor. The competition isn’t at the level it will be once the regular season kicks off, but it has allowed the team to gain confidence, establish an early identity and learn to play side-by-side. Kentucky recorded 49 assists to just 18 turnovers in its first two games on the Big Blue Bahamas Tour.

With two more games to play this weekend before the team returns to Lexington, Kentucky will continue to build chemistry on the field, but it’s what happens off the field over the next few days that could carry its fruits in March.

“That’s what it’s all about. The camaraderie,” assistant coach Chin Coleman said after Thursday’s 102-40 win over Tec de Monterrey.We have guys going fishing tomorrow, we have guys going to the water park tomorrow, we have guys building sand castles. This is how we win basketball games. The game is won even before it has been played. If you win your locker room and your guys are connected – we’re talking connectivity, it’s won off the pitch so what those guys are doing is so invaluable to our season we’re happy to have a chance to come down here and link and build sand castles and put myself in a picture of a shirt. That’s what wins basketball games, so we’re taking advantage of that opportunity.

It was mostly a basketball trip (or a business trip in the case of Oscar Tshiebwe) for the team since arriving at the Baha Mar Resort on Monday, but with lots of fun and team bonding sprinkled throughout. They were able to sneak in a boat ride and stop at the water park. Friday – a day off – the team spent the morning helping one of head coach John Calipari’s most passionate projects, working with Samaritan’s Feet to provide shoes for local children.

As Coach Coleman said, the team will go fishing and head to the water park again on Friday to take advantage of basketball’s brief comeback. It’s still a vacation, after all.

This team already knows each other pretty well too. Six rotational pieces from last season’s roster have returned for the 2022-23 season, including a couple in Jacob Toppin and Lance Ware who are now entering third grade at Kentucky. Having those relationships already in place is unusual for a team led by Calipari, but early feedback from two pre-season games has proven encouraging.

“The atmosphere is incredible. We all love each other, we’re all brothers,” Toppin told KSR after Thursday’s blowout win. “Even when we have disagreements, we don’t let them drag on. We think about what we need to do to help each other. I really like this group because everyone is locked up, everyone talks to each other, everyone is trying to improve, so that’s a big part of the success.

The start of the regular season is still about three months away, but it’s hard not to notice the subtle improvements from the returning players and the stellar performances from the freshman trio.

“I think we’re doing really well,” CJ Fredrick told KSR on Thursday night. “For it to be August 11 and as smooth as we’re playing at the moment, I’m not surprised – I guess I’m a bit surprised. I didn’t think we would look so good straight away. The focus has been on defense and I’m not surprised that our defense is good right now because we’re hammering it every day in training, but I’m a little surprised. young guys and new stuff coming in and playing together, we’re looking pretty solid right now.

If sand castles and water slides lead to success, it’s a win-win situation for everyone involved.